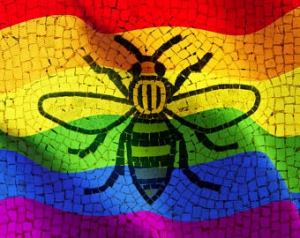 This is another one for Pride month #pridenotprejudice; but I was going to read it anyway, because it’s about a postman in Farnworth.  Well, it’s set in a fictional Lancashire town called Toddington, but it’s very obviously Bolton (BTW, if anyone should happen to read this and be unable to remember the name of the posh department store which closed down, it was Whitakers.  Thank you, Google.), and Albert’s postal round is “the Flower(s)Estate”, which is the Harper Green area of the Farnworth area of Bolton.  It’s that bit you go through if you’re trying to get to the northbound M61 from Whitefield/Radcliffe without going on the M60.  “Toddington Hall’ is Turton Tower, I think – could be Smithills, but the Second World War bunker where teenage Albert used to meet his boyfriend is definitely up near Turton Tower, .

OK, so to get back to the point 😀 , Albert Entwistle is a closeted gay man who’s about to turn 65.  He appears to have no living relatives, and has no friends – which, poignantly, we learn is because he’s always been frightened to get close to people, in case they realised that he was gay and rejected him, or, before same sex relationships between men were legalised, it even resulted in his imprisonment.  As with a lot of things in life, a lot of this goes back to bullying at school.  It’s also, as is often the case with LGBT people, because of the attitude of a family member – in Albert’s case, his late father.  The only things really going on in his life are his cat, his job and Coronation Street.  Then his cat dies, and he’s told that his employers have a policy of compulsory retirement at 65.

Albert decides that it’s time to turn his life around.  He finally comes out as gay, makes friends with Nicole, a 19-year-old single mother who’s got boyfriend trouble, and decides to try to track down his high school sweetheart – a man named George, whom we later find out was arrested by Albert’s dad, a policeman, whilst Albert ran off and left him to his fate.

Some of it’s really very moving, especially Albert’s reflections on thinking that no-one could love him because he was gay, and the flashbacks to discussions he had with George about why their relationship should be seen as wrong.  However, some of it’s a bit OTT.  The day after Albert tells his colleagues that he’s gay, he arrives at work to find that four of them have dressed up as the Village People and the building’s been decorated with rainbow bunting.  However supportive you might want to be of a colleague who’s waited until the age of 64 to come out, would anyone actually do that?!

He then learns that George was working in the Gay Village – i.e. the Canal Street area of Manchester – at one time, and he and Nicole set out to try to find him.  It turns out that George has moved to London and is a drag queen – and, unlike Albert, has always been out and proud and a campaigner for gay rights.  Drag queens were really big in Manchester when I was a kid in the ’80s, thanks mainly to the wonderful and much-missed Foo Foo Lammar.   I don’t see why they had to say that George had moved to London, but maybe it was just to extend the story: finding him so close to “Toddington” would have been too easy.

We then learn that Albert’s dad knew about him and George, and blackmailed him into ending the relationship by threatening to prosecute him otherwise.   Of course, once Albert finds George and explains this, they get back together and presumably live happily ever after.  And Nicole’s relationship with her boyfriend also gets sorted out, and they presumably live happily ever after as well.

The author’s slightly overdone several passages involving George thinking that he’s doing this for all gay men who had to hide their true selves, all gay men who were ever imprisoned, anybody whose life’s been cut short, etc etc.  And the ending’s a bit cheesy and predictable.  But, all in all, it’s a moving story.  It’s a very Northern story, too – Albert, Nicole and George would all fit right into Coronation Street!

Not bad at all, and an important reminder of the issues faced by gay men – including the fact that, even after relationships between men were legalised, the age of consent was higher than that for heterosexual relationships and remained so until 2001 – and the impact of those on people’s mental health and daily lives.  Please always be kind to others ❤️🙏.

I read this (well, apart from the fact that it was on a 99p Kindle offer) partly in honour of the forthcoming Manchester Pride weekend (although the stupid virus has put the kibosh on most of it), and partly (the author being almost exactly the same age as me) as an excuse for a big nostalgia fest about growing up in the North West in the ’80s and early ’90s … never missing an episode of either Coronation Street or Dynasty, reading teen pop magazines, and wearing hooded tops, telling everyone you were obsessed with Madchester music, and hoping that no-one would ever, ever call you either a stiff or a townie.  My entire class once wasted half a Latin lesson discussing how uncool it was to be a townie.  I have no idea why the teacher let us do this.

It’s a novel, but based closely on the author’s own experiences of growing up as a young gay man in Bolton, the issues he faced, and his obsession with Madonna.  How big was Madonna in the ’80s?!  I remember going round to my then best friend’s house for tea on the day that the Like A Prayer video was shown on TV in the UK for the first time, and it was *such* a big deal!   He rather overplays the northern working-class stereotypes; the fact that the book’s written in the present tense is a bit annoying; and the Madonna thing comes and goes rather than being the central theme as the title suggests; but it’s very thoughtfully-written and genuinely moving.

We see how our main man, Charlie (aka Matt) struggles badly due to being bullied at school, and how he feels that he doesn’t fit in either there or at home.  But we’re told that he finds that going to the gay bars and clubs in Canal Street (the heart of the Gay Village in Manchester) makes life a lot easier, which is rather lovely.  We try to be a welcoming city where everyone can be themselves ❤ .  Then we see him go off to university … and then move to London, which is a shame, as I thought the book was going to be set in Bolton.

His life gets in a complete mess, as he struggles to find his place in the world, but it all works out in the end   It could really have done with being a bit longer, to explain it all properly, but it all works out in the end.  And, when he finally meets Mr Right and they get married, the ceremony takes place at Bolton Town Hall and not in London.  Hooray!   And – see what I mean about overdoing the stereotypes?! – they even have Lancashire hotpot at the reception.  This is a really lovely book, and, especially if you can get it on the 99p deal, it’s well worth reading.